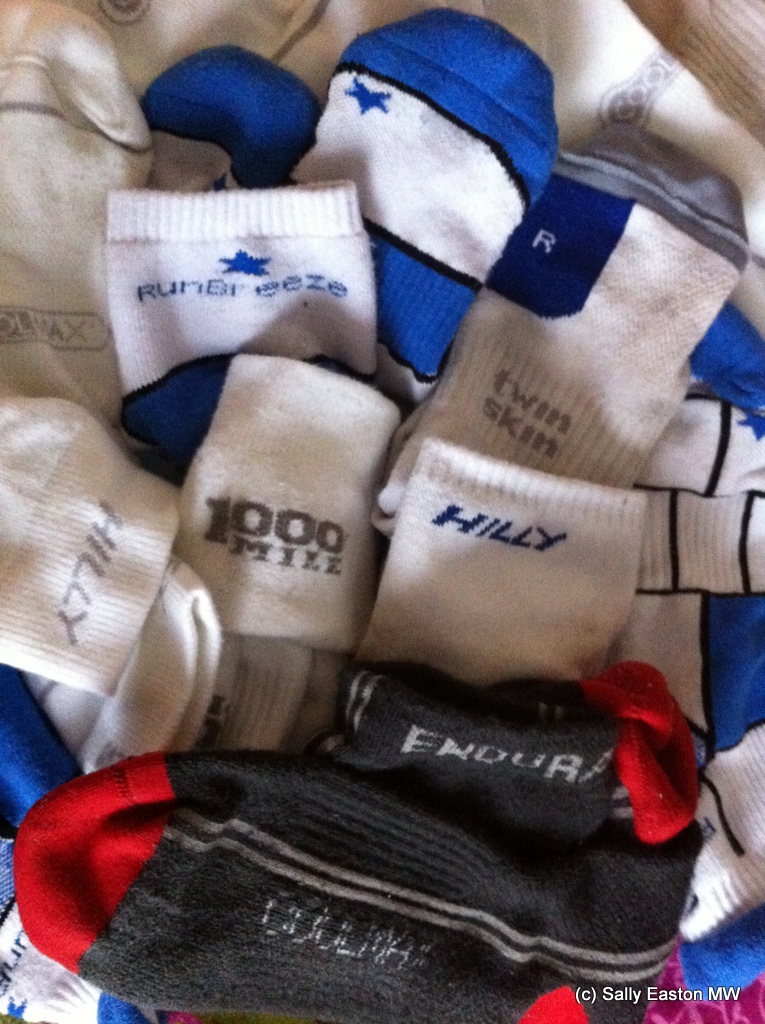 Wow, how complicated have socks become? And how on earth did this turn into such a long post. Never, I suspect, has more been written about socks by someone so previously little interested in them.

Last summer when I started this lark, I used to just put on the Coolmax liners I use in my two sock system for my walking boots.

Now I’m bamboozled by socks that are one-layer or anti-blistering two-layer; socks that are thinner or thicker – cushioned I’m told is the technical jargon; socks that are ergonomic (more technical lingo – foot-specific) or ambidextrous, as it were. Actually would that be ambipedal? Anyway, they can go on either foot. All I know is Coolmax is a must. Gotta have Coolmax.

If I’m going to spend 4-5 hours so-called running around my capital city, I’m definitely going to do some research into what’s on my feet. As it happens, I’m quite liking cushioned at the moment. That’s probably just because it contrasts so dramatically with the comfort-denying thin things I started out with.

The jury’s out on the anti-blistering two layer.  I have the sneakiest suspicion they give me blisters. But to be fair, I may have trialled them when I was wading calf-deep in New Forest flood waters. Wet feet and wet shoes is blister-forming paradise, by anyone’s standards, I reckon. Must give them another trial.

I haven’t decided about ankle length or liner length. I’m rather thinking that’ll just be seasonally-adjusted.

I’m unperturbed by ergonomic or ambipedal. Though I’m afraid Runbreeze lose out here. They have a star on one side of each sock and you’re supposed to remember whether the star goes on the inside or the outside of the foot. I so have enough stuff in my head thanks very much without adding in extra nonsense (yes, there is lots of nonsense in my head already).

Would all this new sock technology affect the size of running shoe I need? I’m aware all the socks I now use to run in are thicker than the Coolmax liners I used to use on their own. No cushioning, how stupid was I? So, I took six pairs of socks with me to try on new running shoes. I can barely believe I’m admitting to that one.

The shop got in two different shoe sizes of the same shoe for me so I could play around with sock combos and shoe sizes.

I had cycling socks (Endura, Coolmax), 1000 mile socks (they’re all two layer aren’t they?), Runbreeze single layer, Runbreeze two layer, and I had Hilly one layer (Coolmax) and two layer. The good news is there’s b***er all difference between them in the in-shoe experience, with either sized shoe, at least in-store.

The marginally perplexing news is that before I went in, I really thought I would get the bigger shoe. Bit more space, thicker socks. But I came out with the same size as I have now. I have troublesome feet, there’s a whole UK-size difference between them, so shoes are invariably a compromise. Do I consider toes too close to the end of one foot, or heel too loose and rubby on the other foot? Well, status quo prevailed (I must be missing another not-quite-right cultural reference opportunity there). I suppose if it ain’t broke etc.

What I can report with child-like enthusiasm is that the trim on my new running shoes is purple and turquoise. Two of my favourite colours. Lucky, lucky me. Except I’ll probably need another pair before April and they might have moved on to different colours by then. No I am not buying two pairs now. Money, money, money.

And the real thing I’ve discovered … I love wearing new socks!  Now I know we’re told not to wear new socks for a big run, but at this stage it’s awfully tempting. I have a prophylactic physio appointment soon with someone who’s also a marathon runner, and local, and recommended, blimey, how serendipitous is that? I will add it to my list of questions.

But the truly encouraging news is my relief that my recent sock obsession is declared cured. Not much difference to the in-shoe experience. I feel I’ve done sufficient benchmarking of the competitive set. I know Coolmax is a must, so it’ll probably be Endura cycling socks or Hilly mono-layer … unless I find some other new ones to try.

Update 1: for readers of ‘Running with wolves’. Yup. Recall with the words ‘jelly baby’ works. She’s not a stupid dog. Immediate attention, then trots over and jumps in the car (she almost never ‘just’ jumps in the car).

Update 2: for readers of “The 329 steps”, I made it up three times, but jelly legs on the third scaling and jelly legs all the way home. Ooof.