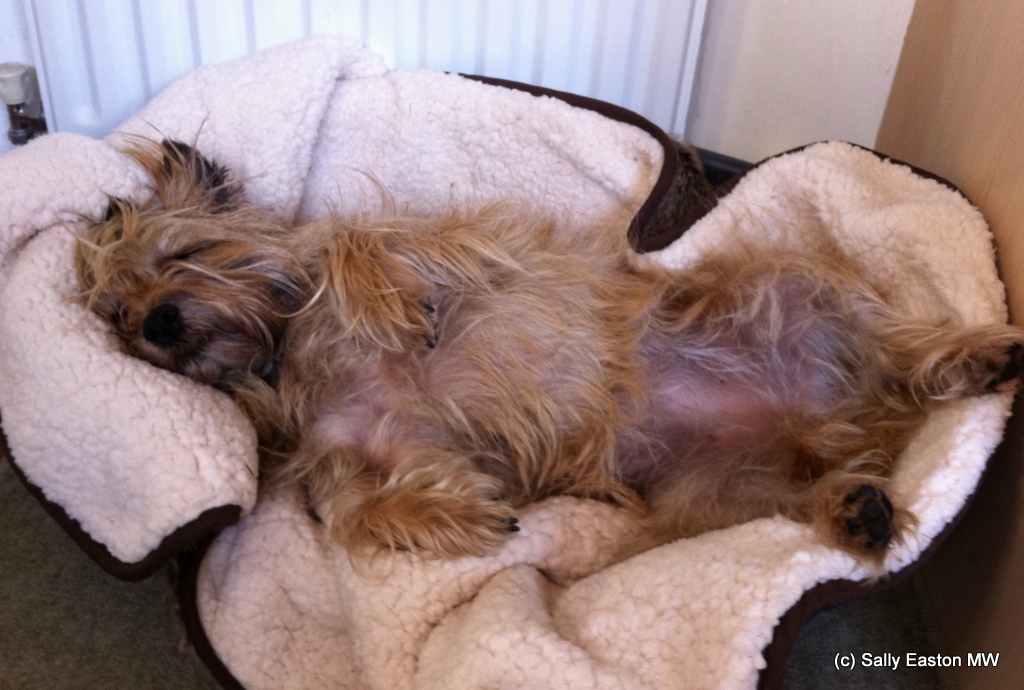 And this is after a short stroll in the park.

She’s only got little legs (but she does have four of them, I counter). She comes on my short runs before sun-up during the week, and even has her own little torch, a small flashing light I bought in a bicycle shop which velcros round her collar. She’s invariably behind me so it doesn’t take too much for me to check she’s still in range. Sadly (for me) her bringing up the rear has nothing to do with our relative speeds, and far more to do with her frankly far too leisurely attitude to the whole training thing, and her much stronger desire than me to sniff things (other than wine, obviously).  She occasionally taunts me, especially if I’ve slowed to go up an incline, by racing ahead to suggest she’s really just tolerating my ambling pace.

She’s also come on the few long runs I’ve done, including the more-than-four-hours job I did last month. Then she was happy to sleep by the radiator for the rest of the day. Mind you she does that most days, so it’s quite tricky to tell if she really was tired. I absolutely believe she was exhausted. I really do.

If developing a fuelling strategy is important for me on long runs, I seem to be spending even more time on fuelling strategy for my poor little dog. Getting to grips with gels, jogging with jelly babies – I kind of figured that whatever applies to me probably applies to the dog as well with regard to eating stuff on the long run. So I get up really early – two hours before departure for the Forest – in the hope that she’ll be bored enough of waiting to go out that she’ll decide to eat her breakfast, especially if I’m piling food into my mouth at the same time.

There are plenty of puddles (more ponds and lakes given our last few seasons’ inclemency) for her to adopt her own hydration strategy, so no issue there.  And listen, I don’t force-feed her gels on the move. I can barely force-feed those to myself, that’s a gargantuan intellectual manoeuvre for me. But she has taken quite a fancy to the jelly babies. So far she gets more of them than I do. Note to self: must take more with me.

As it goes, I may just have happened across the perfect recall command for the dog. Calling ‘come’ across the park has, at best, selective success, which I attribute to her equally selective hearing.  But ‘jelly baby’ there’s a word association she’s picked up in a nano-second. I’m definitely going to try it as a recall command in the park, no matter how many strange looks I may receive.

I don’t suppose they’ll let me bring her as a running buddy on April 21st. Mind you she’d probably want to say hello to every single person there, so I might not get to run very far. She’ll be better off at home. I’ll just have to concentrate on running without my wolf.