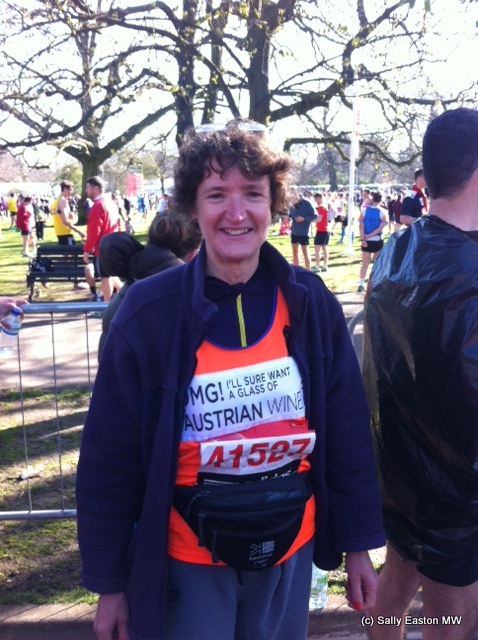 Shivering on the start line

WOW! What a day. What a fabulous, enthralling, joyous, challenging, painful, ‘must complete’ day. What a hot day – 13-14°C. What at atmosphere. Brilliant, brilliant, uplifting crowds, so generous, supportive, encouraging and noisy with cheering. Seamless organisation. I shan’t forget it in a hurry.

In the last ten days before the run I’d been a bit worried about the weather forecast, which was suggesting warm – 13/14°C (spot on, Ms Kirkwood). All my training, given our dreary winter/spring, has been at +/- freezing.  I remember I went out one day, I think at the end of Feb (whenever), which was notably warmer, maybe about 10°C and my body felt and reacted differently. I ran out of water.  Anyway, I talked to my physio the week before the race and she recommended I overheat/stay extra warm during the week before the run to try to get my body used to the forecast warmer temperature. Good call. I reckon keeping at least my torso extra warm (thermals all week) helped a bit. I ran through all the (five/six?) cold shower sprays that were positioned along the course, plus the impromptu hose pipe at the pub (sorry no idea of the name), must have been around mile 20, give or take. 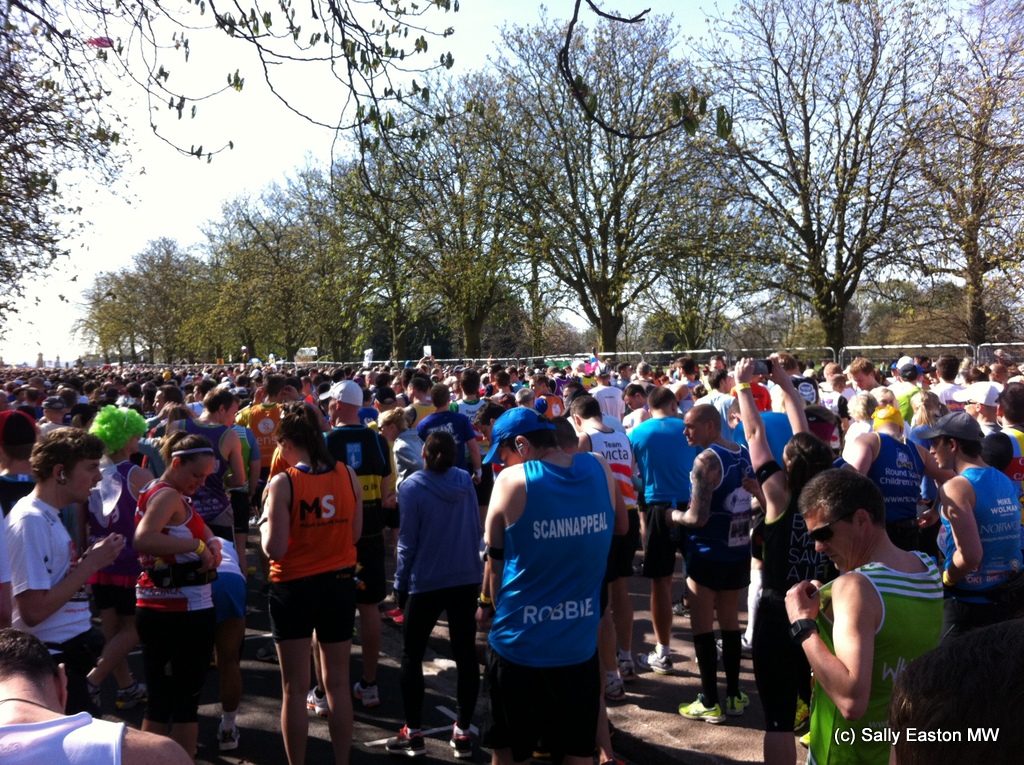 My view from the start line

Onto the race:  I was in pen 6 of 10 (nominally the 4:15 time pen).  I was hoping to be going faster. When I’d done 26.2 miles (26.4 actually) in training (March 9th), I made 3:57, so I was hoping to go better than that, with all the additional training since then. In my reading, I’d even happened across this concept/category of ‘good for age’ (quite like that idea) – or is it ‘fast for age’? It looked like London was 3:50 for my age category (though other marathons were 3:30).  I’m sure you’re beginning to grasp where my brain was going in its ambition for race day…

Anyway, I got to my pen early to make sure I was at the front (pen 5 was the nominal 4:00 pen). I waited there an hour, shivering in the frosty shade, despite being togged up in old clothes that I jettisoned just before 10am.

I can barely believe I’m about to write this but … the first 12-13 miles went by in a flash (emotional flash rather than temporal). The crowds were amazing.  My physio/coach had suggested I stay to the side as there may be more room. She was right (obviously, ex-professional marathon runner that she is). Of course this put me next to the crowds. I even had fun on those early miles, really good fun, though I think I could do this because of all the training I’d put in over the months, which meant I could do the running bit without excessive difficulty. See “Enjoy is SO not the word” for the significance of that statement.  I was low-fiving, high-fiving, middle-fiving countless kids, adults and venerables. Just absorbing the atmosphere and realising I was a part of that atmosphere.  Good feeling.

The downside was the crowds on the road. I spent much of the first 10 miles weaving from left to right, looking at feet, hopping and skipping past fellow runners, trying to avoid tripping and being tripped as I overtook a few folk. There was absolutely no opportunity to ‘run my race’. Any concept of warm up / steady as she goes etc went out of the window in the first five seconds. I had to slow, or weave, while a tiny gap in the field opened up, then accelerate through it, then make sure I didn’t slow down so much that I made the person I’d overtaken need to alter their course/speed. And try to keep calm through all of that, making that the objective my race strategy (I’ll know if there’s ever a next time).  But without prior experience it blew away any concept I’d internalised, over the course of my training, of race pacing and timing and my body’s ability to sustain it over the distance. Oh well, live and learn. Certainly my lungs were burning by the end (by way before the end), so I’d definitely gone beyond my norm. Which is a good thing, I reckon. Shows I can.

I found the pace setters particularly challenging, just because they were doing a brilliant job, but – of course – they had a huge peloton behind them that spread the width of the road.  Really difficult to get past those tight bunches.

And it got tough after Tower Bridge (half way). Heading through Limehouse, the Isle of Dogs, Canary Wharf, the crowds thinned out, to patches of noise and encouragement. I missed them. Folk were holding out tubs of jelly babies and slices of orange for runners.  The running was hard. A blood blister had bloomed and burst by this stage. At least I knew what the spreading stain across the top of my shoe was (it having happened a while ago in training). Not too painful though, that was a toe on the other foot. Never mind.

I’d read about the way, if you write your name on your vest, the crowds shout out personalised encouragement. It was so true. Steve (no idea) must have been going about the same pace as me (or maybe there was more than one Steve), he got lots of shout-outs.  I didn’t have my name on my vest, but I did realise at some stage that people were shouting ‘Go OMG’ (etc) (see pic of my running vest “As easy as A,B,C). So I’m adopting OMG as my new nickname.

I got through most of my mantras. Just thought you’d like to know.

Another strategy learning: I found myself ‘tucking in’ behind (following) someone for a while. I think it might have been the antithesis of the brainpower required to weave in and out of runners trying to find space.  This was evidently too much brain power for running.  I never got a chance to have imaginary conversations with my buddies. I was forced to think about how to run the race.  So following someone for a while let me switch off the brain. But that turned into a bad strategy because suddenly I’d wake up and realise they weren’t actually going at the pace I thought I should be going at. So I’d have to overtake and get the brain in gear again (and the legs). Clearly my brain hasn’t been engaged on my training runs…

Think I drank too much water. I’d read quite a few stories about people who’d over-hydrated and fell ill (out of the race) because of it. I guess because they were thinking they should drink lots of water. And there are water stations every mile, or something, so it’s very easy to imagine one should drink at every station.  Anyway, this was one of the things that was top of my mind. In training I would drink ‘to thirst’. Easy when you’re carrying a hydration sack – water literally on tap. So I decided that rather than drink ‘to miles’, i.e. every water station, I’d carry one of the bottles with me so I could drink ‘to thirst’ and only pick up a new bottle when I was thirsty.  Anyway, I started feeling nauseous with about 4 miles to go, so I stopped drinking (still carrying a bottle of water just in case). I did start to feel less nauseous, so maybe it was that.

I’m looking at the route now. The second half was tough (have I said that already), and I have little memory of several of those last few miles. I remember at some point concentrating on my arms: move your arms because your legs have to follow, so I was doing big (and what I thought was fast) arm movements. Bless Team Purple, they spotted me at 23 miles and later said I looked like was holding good form. My mental map of London’s not great, but I don’t remember passing London Bridge. I remember Southwark Bridge only because I nodded at Vintners’ Hall on the way past.

I remember thinking I was still passing more people than were passing me. That helped.  I thought about the money I was raising for Leukaemia Care. That helped. Not letting people down. That’s always good motivation.

Don’t remember Waterloo, or Hungerford or Westminster bridges. I remember trying to think how we get to Buck House from wherever I was, which was probably as good a distraction as any (and at which exercise I did very badly). I do remember being channelled down Great George Street to Birdcage Walk.  The 600m to go sign was welcome (ooh, understatement).  I love the way we Brits mix and match our units of measurement. Big, over-the-road gantries festooned with balloons as mile markers all the way round the course. Toilets marked in metres distant. 600 metres to go. How cool are we Brits? 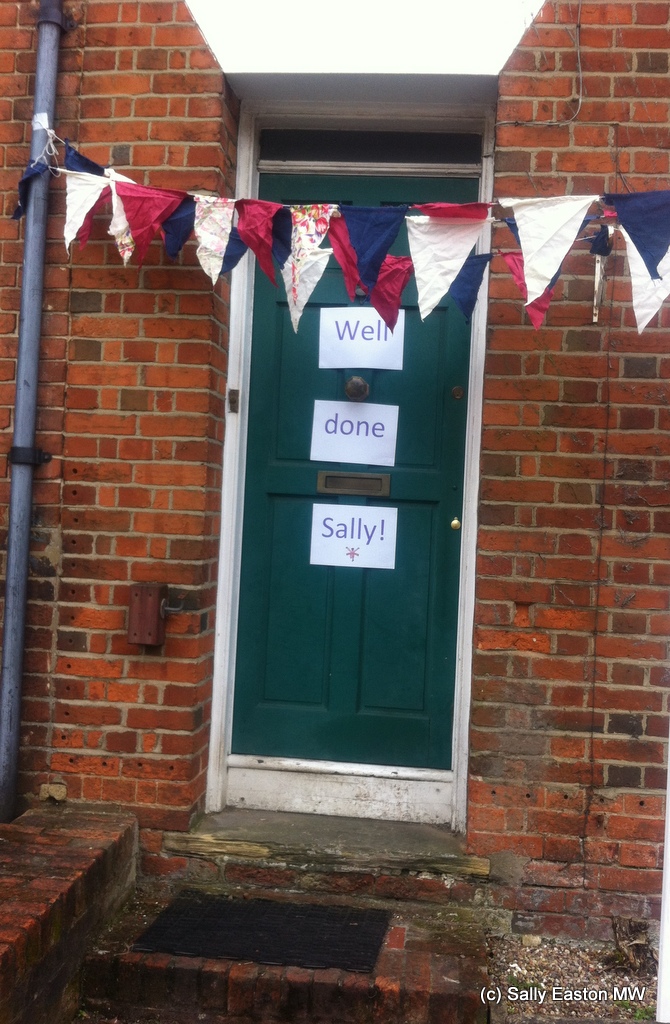 Team Purple: you rock! The hugest of humungously huge thanks to Team Purple, both the on-location team and the home-team. For your long term support all through. For getting me there safely, and bringing me home. For setting yourselves up at various mileages, giving me segmented focus points to break up the race. For taking the dog out, and festooning my home with recycled (I’m very impressed with re-usage) Jubilee bunting. For feeding me delicious, nourishing recovery nosh last night. For being brilliant pals. Huge thanks also to my other lovely pals who texted, emailed, left messages etc. My ‘phone’s never been so noisy.

I did complete.  In 3:33:19. I know, I know, great time. I even managed (I wondered if I would, I wanted to and hoped my legs would obey), what I’m calling a sprint finish down the Mall. In reality it was just a tiny bit faster than I’d been doing. But I did pick up the pace. And I imagined the louder cheering that happened at the same time really was just for me. But me, being me, I can’t help but feel the faintest twinge of something at not breaking the 3.30 marker. Not too much though. At all. I got up this morning and said a quiet ‘well done’ to myself. That’s a pretty good result.

One thought on “London: you rock”