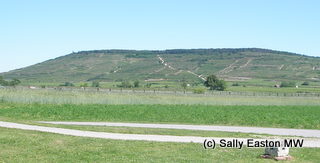 Heiligenstein in Austria – originally (1280) named because the sun “burns like hell” on it. Makes some exquisite wines now.

Firstly, what is that I kept avoiding? Interval training appears to be repetitions of longer and/or shorter runs over a set distance (or time) with short recovery times between distances. For example two sets of this set: 1,000m, 800m, 600m, 400m, 200m, with 75 second recovery between each distance. Then a five minute rest before you do the set again. The idea is you run faster for each shorter distance.

Why do it? I gather the aim is to build fitness. There’s a word I’m going to have to address in a future post. Fitter than what? Fit for what purpose?

I’ve read that interval training builds speed and endurance. In which case I should be loving it. I think it’s supposed to improve speed and endurance by getting the heart to work harder. I’ve also read more words about building lactate tolerance with interval training. Still don’t understand this lactate stuff. Oh flip, I see research coming … which I’m likely to avoid as I’m doing lots of research for the day job. This involves sitting on my backside in front of the screen, which I don’t really want to do more of at the end of the working day. Oh dear, where’s my running motivation gone?

Anyway, it turns out I’ve been doing interval training at run club, for the last couple of months, since I started up again after a lengthy London marathon reprieve period, during which I chugged along and jogged a bit. Now I’m training for the Bournemouth marathon, intervals it is (along with my long, slow run and a few hills).  Intervals are absolutely fine. Tough – I have to try to run faster which is quite tricky for a one-modest-pace sort of runner. But actually, I think I may be beginning to recognise that maybe I have more than one pace, after all. Another later post, perhaps.

So many learnings. So much to learn. Whoever said running was simply putting one foot in front of the other? Mad fool. It’s much more complex.

It turns out interval training is not a nemesis at all. I turn up to the track. Get told what to do. Do it. Go home. I’ve realised what I don’t like is the idea of creating and managing it all myself. It’s fine (organisationally) down at track because, well, because it’s a measured distance already, we’re given a schedule, we do it and that’s it. Last time the schedule for marathon training (as opposed to endurance training or middle distance training) was 8 x 1km with 75 second recovery between each 1km. I guess I’m supposed to be pushing myself to go faster than how fast (slow) I think I’d run a marathon. But that’s another story. Each of my 8 x 1km was not far off the same speed (8 seconds the difference between slowest and fastest, and the second four were quicker than the first four. Aah, the lure of completion!).

The nemesis bit, though now that sounds just a wee bit too dramatic a word for it, is that I simply don’t want to organise it myself, and measure distances out, and create a structured programme etc. etc. My inherent laziness is raising its lassitudinous head. Oh dear, where’s my running motivation gone?

Nodding to nemesis number one, in the pool I regularly get an ‘ooh, blimey, I’m swimming, I’m not supposed to be able to do this’ thought fly through my head. And to be fair, it’s typically a more robust expletive. But I am swimming, and it’s a fleeting thought.

There’s still too much to be thinking about with swimming, but I’m not solely thinking about breathing. But I do wonder why it’s so difficult to count laps. It’s a simple sequential numbering that doesn’t get unmanageably high and yet I invariably fail to remember whether I’ve done 4 or 5 laps, or 8 or 9 laps. What IS going on there?

Having mentioned the pool … interval training works in the pool, and on the bike, as well as on the track. Blimey – slowly, slowly I reckon. Let’s get used to the track first.

Do you know, even a few months ago, if someone had suggested I would overcome my two sporty nemeses by halfway through the summer I’d have wryly smiled and sadly but gently sighed at their naive and optimistic encouragement. Bugger me sideways though, I appear to have done it.