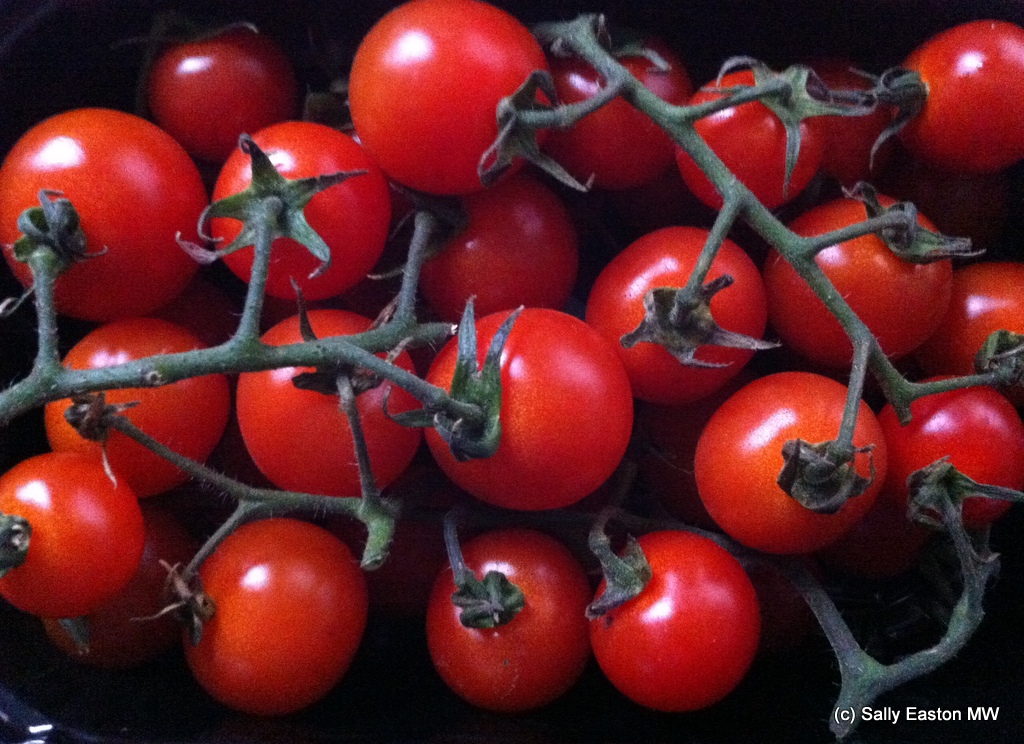 There’s been an increasing amount of thought-crowding around all this training as the big day approaches. For a couple of months now I’ve been living with intermittent gnawing nausea, which grows more mittent and less inter the nearer we get to the day.  Will this pass once it’s all over? Fortunately it hasn’t so far prevented me from eating as inappropriately as I ever did. I haven’t quite got the hang of nutrition the whole way through this saga.

Aside:  I’m afraid Hugh’s breakfast bars (see “Fuelling”) have hit the buffers. I’ve force-fed myself too many times. I can’t eat them any more.  They’ve been substituted for fabulous flapjack, of which I never tire.

Though I have to say, and never did I imagine I might, I’m having a huge tomato fetish. I don’t really like tomatoes. I’ve never liked tomatoes. Now I’m buying little cherry-type toms by the half-kilo and I’m snacking on them every time I make a cup of tea (every hour then). What’s that about? Is there something in tomato that runners need? (see how effortlessly I now describe myself as a runner, ark ark).  And beetroot. Almost every day. What’s in that then? And other things I don’t normally eat very often, but the tomatoes have me flummoxed. I’m even quite enjoying the flavour. Weird.

In the last few weeks, as D-day approaches, I’ve noticed other tweaking and twinge-ing neuroses abounding. When is a tweak just a brain-rush of imagination? When does a twinge become more than an excuse not to train? Ooh I’d better rest … or do I push through and do an extra core strength programme?  People say ‘listen to your body’, but these days all my body’s really saying is ‘help, I’m exhausted, put me in an unattended, darkened room for three days’.

Health hypochondria too. I keep imagining I’m about to get a respiratory tract infection. Fortunately my physio says I’m one of about 35,000 people having all these (imaginary) symptoms. This makes me feel much better.  Symptoms haven’t gone away though…

I can’t quite believe, after all this time, I’m even just a little bit looking forward to it all being over. Don’t get me wrong, I’m looking forward (in perverse fashion) to doing the race too. But I have been feeling almost permanently exhausted for what seems like ages, probably just a couple of weeks. And I’m not even doing a heavy training programme. I’ve only ever done one long run a week, despite both coach and physio suggesting I up the length (and tempo – haven’t done that either) of a midweek run. I just never had the time or inclination. Of course, if I didn’t have the inclination I would never have the time.

And here it is now – wow, just a few days to go. I can’t believe I’m even imagining (hallucinating again) anything about creating a race strategy. Other than staying upright, keeping moving, and eventually crossing the finishing line, even if I have to crawl across.

Yet here I am. I’ve been imagining I might have faster segments and slower segments: the warm up phase, the steady phase, the first ‘speedy’ phase, a settled slower phase, a second ‘speedy’ phase to finish.  Actually this may be both neurotic and an hallucination.  All I reckon I’m actually going to be thinking about is (a) how to avoid being trampled underfoot and (b) just finishing.

But here’s the hallucination – I know my long runs have a sort of rhythm, and it’s so not the one in the paragraph above. In spite of any imaginings of race strategy, all my runs follow a similar pattern:

The warm up (quite long) – the OK phase (a few miles’ worth, usually) – the long decline from discomfort to pain – finish(ed). Within this I probably just have a slow pace and a slower pace. All things are relative I guess. And of course, that would indeed make one of them faster. Yay!

I was running with other people on the track the other week. It was a bit scary actually, having only a dozen fast folk thunder past right close by. I hope that’s not an indication of what’s to come on the day (see (a) above). It’ll really burst my isolation bubble, which so far has been how I concentrate and disappear into the run so I don’t have to think and chivvy myself so much.

I’m a bit worried about running with lots of people…

Evidence of additional hallucination is that I’m daring even to speculate that my remedial glute exercises (see ‘Glum Glutes”) may be beginning to work.  But the question is, it’s all very well standing/ kneeling/ lying in my living room (with my glass of wine / watching the telly / cuddling the dog … delete as appropriate) concentrating on tiny glute-growth movements, but how on earth does that convert to them automatically (autonomically?) doing their thing on the run? Will they/do they supersede my previous modus operandi – i.e. using my thighs and hips?

Maybe it’s like driving. Who now remembers how to drive? All the movements become automatic at some point (which is separate from all the bad habits most drivers develop). There’s a technical word to describe that, isn’t there? Automaticity?

The other, arguably much more significant, question, of course, is will I have a cute bum at the end of all my glute exercises? Now that would make the investment worthwhile.

2 thoughts on “Hallucinations and neuroses”