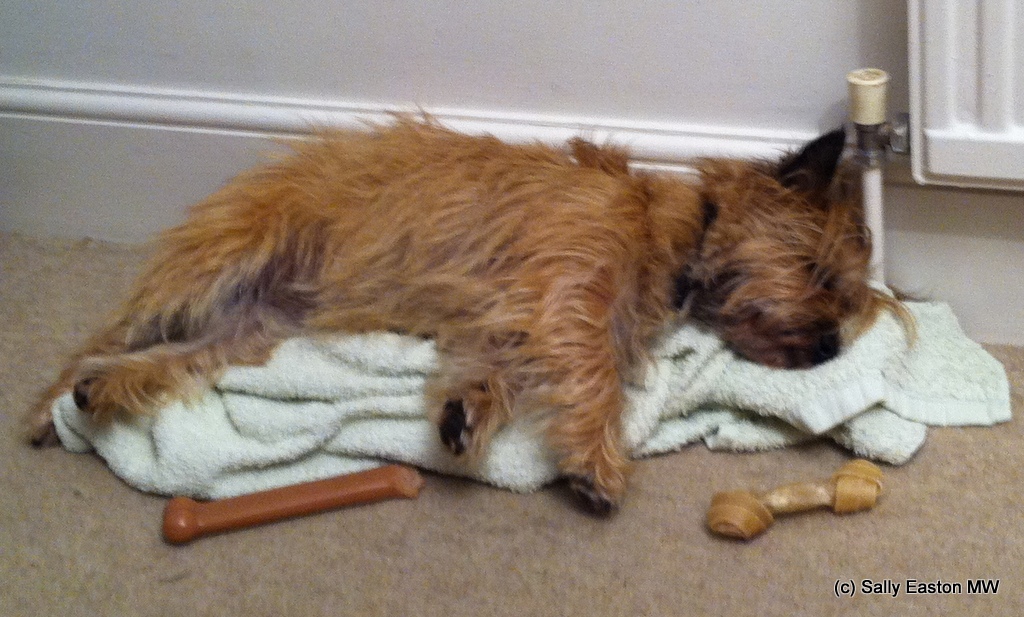 I’m still a bit demob-happy after last weekend.  I did it. How cool is that?  I ran a marathon. I ran the London marathon. I’m a marathon runner!

What’s more, I have my first official race time.  And I have a personal best.  That’s got to be one of the coolest things about one’s first running race: you’re guaranteed a PB!

I’m going to have to work so much harder next time.

Unsurprisingly there will be a next time. When I was ill with virus – the very day my running number came through, the marathon magazine also landed on my doormat. Probably predictably I signed up for Bournemouth – there was a flyer in the mag. My justification and rationale at the time was (a) contingency planning – what if I didn’t get to London because of illness, (b) Bournemouth’s not far from me, in fact nearer than London, and (c) it’s the first marathon in Bournemouth. I reckon it’s good to be involved in inaugural events. I’ll be able to say “I was at the very first Bournemouth marathon”.

I remembered a funny (only in a single eyebrow-raise way) thing happened at the end of the race last week. As I hit the mat at the finish, and stopped, I had the briefest moment of doubt and insecurity about whether I should have stopped running. Was I supposed to keep going? Was it really over? I had that fleeting thing of shall I start running again. Talk about single focus. But there was nowhere to go. Fortunately you’re gently, smilingly funnelled through a sheep dip sort of constriction-thing where the timing tag is removed and where you get your medal, before being released further down into the Mall to have photo’ taken, to collect goody bag and reclaim kit bag. I saw quite a few half-slumped figures sitting on the kerb.

Obviously I emailed my coaches on the way home. The responses:  well, apart from amazing time … (1) did I want to go sub-3.30 (doh, yes), (2), if I’d been more conservative early on, and not had so much fun with the atmosphere and the crowds, well, I might have got under 3.30.

My big, and happy, reflection is I wouldn’t swap those first 12 miles for a 3-minute quicker finish time. If having so much fun and being part of London 2013 cost me those three minutes, I’m happy at the price. I got to the London marathon. I got to run the London marathon.  That’s huge. I wouldn’t trade that uplifting feeling for three minutes.  What I’m going to remember is the joy of being part of that atmosphere, part of that event, part of that moment with those brilliant crowds. I’ll remember the first half as a fabulous, soul-sunny experience. I won’t remember the increasing pain of the second half.

And anyway, two coaches have suggested I can get under 3.30. So there we go. That’s got to be the ambition for next time (October 6th). I guess that means I get May ‘off’ (well half of it, after the triathlon) then start a training programme at the beginning of June. I might have to do a proper training programme rather than cherry pick the bits I fancied doing …

The other realisation is that I did a good time, a very good time by everyone else’s accounts.  Everyone, to a (wo)man, has said what an amazing time. Incongruously, I’m beginning to feel a bit disingenuous saying this now, but I genuinely had no idea that aiming for 3.30 was a big deal. I’d scraped under four hours in training. I really did just think that with another six weeks’ training I might be able to lop off half an hour. It hadn’t occurred to me that it would be considered a pretty fast time. I was just running the speed I thought I could go. Which I’ve always described as long and slow… someone’s already said no-one’s going to believe me when I say that now.

I reckon if someone had said 3.30 is fast etc., I’d probably have talked myself out of being able to get near it, saying to myself, ooh, I couldn’t possibly be that fast, then. Ignorance (naivety?) clearly can bring achievement.

So, my legs starting working without pain on Wednesday. For two days I felt a bit like I’d been back-kicked by a horse in both legs (my quads haven’t hurt before, apart from after cycling). I ceased to need to leverage myself into and out of a seated position with my arms (my triceps will probably miss the workout). I even went swimming for some triathlon training.  And talk about idiocy … all this time I’d been convinced I’d got three weeks between marathon and sprint triathlon. I hadn’t even thought to question it or check the diary.  But on the way up to the marathon, one of my triathlon buddies, J, pointed out it’s only two weeks.  Ho hum.

And what else … over these months of training two people have said I’ve been a bit of influence/motivation/inspiration for them to get back to the gym, or start running.  That’s hugely humbling. I’m the most un-influential person I know, but it gives me such a warm feeling to imagine somebody’s changing their behaviour in a small way to do more exercise because of what I’ve achieved over the last several months in that direction. But, you know, if I can do it, anyone can. Over the last 16-18 months I have so, totally, utterly, gone from obese sofa slob to enthusiastic exerciser.

Have I mentioned I’m a marathon runner 🙂