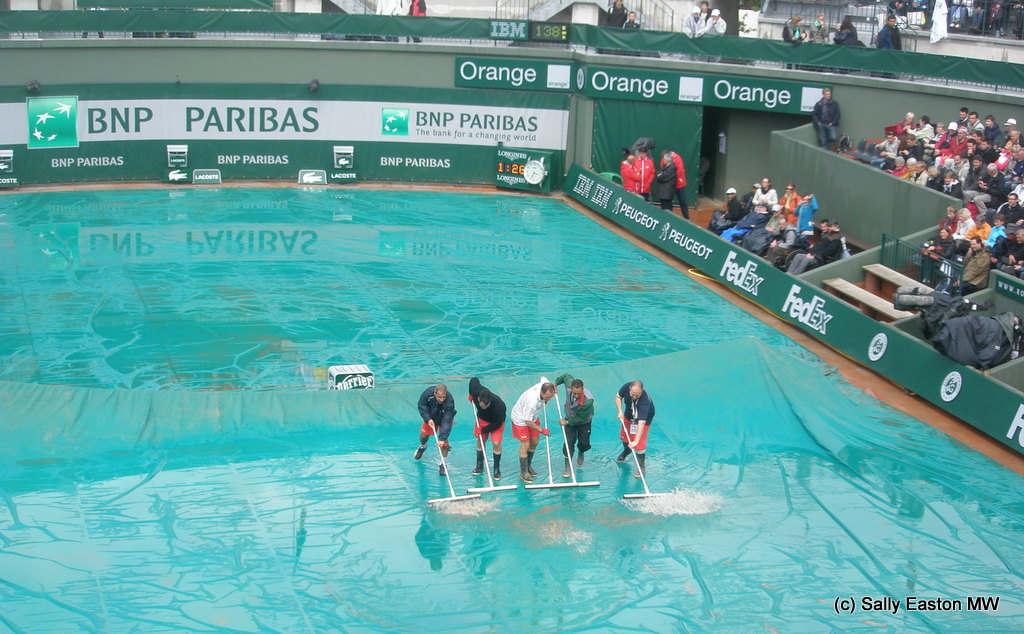 Near-swimming at Roland Garros at the end of May

It’s now early April on my watery plough to meet nemesis number one. I do hope it’s a happy ending.

M had suggested so much new stuff to do last time, I think I’m going to call this the beginning of the new regime:
a)       do existing programme
b)       add in drills with flippers and paddles
c)       take fewer rests between drills
d)      spend more time in pool – build endurance
e)       keep a log e.g. of times/heart rate

I’ve decided to deal with a) more time in pool and b) start with shorter rests rather than no rests. Baby steps…

M reckons it is my leg work that’s making me exhausted/breathless. He pointed out a couple of swimmers in the pool who’d been doing lengths for ages. But he said, barely using their legs. This makes sense for me. I get very breathless when doing my ‘just legs’ drills, with/out floats. Maybe I do need to re-evaluate this after all. I thought hindsight had suggested my breathlessness was in my head, but maybe it is a combination.

Legs not efficient. I think I’m still trying to build in the idea that legs should be straight. That’s a lot of buttock-clenching to do that. In fact I read about someone who clenched a literal or virtual (I can’t remember) monetary note between his cheeks. I occasionally think about that in training, trying to do the same myself to see if it might help. Actually, I should count as measurable progress on another scale because it means for that instant I’m not thinking about breathing.

M also said flippers/paddles would build strength because of the resistance. I’m so obtuse, that didn’t occur to me. I just thought I was shifting through the water like some sort of whizzy torpedo thing.

Anyway, back to the patting one’s head whilst rubbing one’s stomach scenario.  Early on this is what I decided arms and legs were doing – separate things that both needed to work together to do their thing.  I can do the original pat head/rub stomach, I said to myself. Though I’ve clearly been failing to achieve its equivalent in the pool. Ho hum. Keep plugging away.

I’m sure my legs ARE getting stronger you know. And if I say it often enough maybe I’ll start believing it. I still find it weird that I can run for miles but struggle to do two laps in the pool.  Although I was reading about running efficiency the other day – long running is about NOT using much energy, so it’s about doing stuff without too much effort/exertion (it sure doesn’t feel like low effort when I’m running). Anyway, to continue my aside on the running front – maybe I need to start doing speed work after all to build some strength into my legs. Oh, blimey. Over to nemesis number two. And maybe that’ll help in the pool too.  Ooh, connected nemeses, do you think? Does that make them nemeses squared?

Using the flippers is giving me a different perspective on the whole breathing thing. Have you noticed I’m a bit fixated on this?  I’ve realised I’ve been trying to get my arms to move as fast as my feet, or in synch (somehow) with my feet, which obviously they don’t do with flippers. So … learning … legs go at one pace, arms go at another. And I think that’s OK.  I have to keep my arms going at a pace that gives me sufficient time for breathing. And importantly I can slow down my arm rotation to increase the breathing time. That’s a good learning.

Not sure if I’ve mentioned it before, but I have learnt there’s such as thing as breathing too much. If I breathe too much in, there’s not enough time to let it all out under the water.  Intellectually I realise I could breathe every five rather than three strokes, but I’m really not going there just now.  And actually with running I don’t have huge inhalations.  Every now and then, running, I take a big sigh and sort of recalibrate or reset my breathing, but not that often. Must be able to translate this across to swimming… surely?

Strength and endurance didn’t get off to too great a start. In one mid-April session I had a serious amount of breathing panicking. I was trying to do the session with fewer and shorter rests. No time for heart rate to subside. Instead there was lots of gulping, and lots of breathing fear.

Just have to get back in the water next time and start again… experiential learning … I keep not drowning.