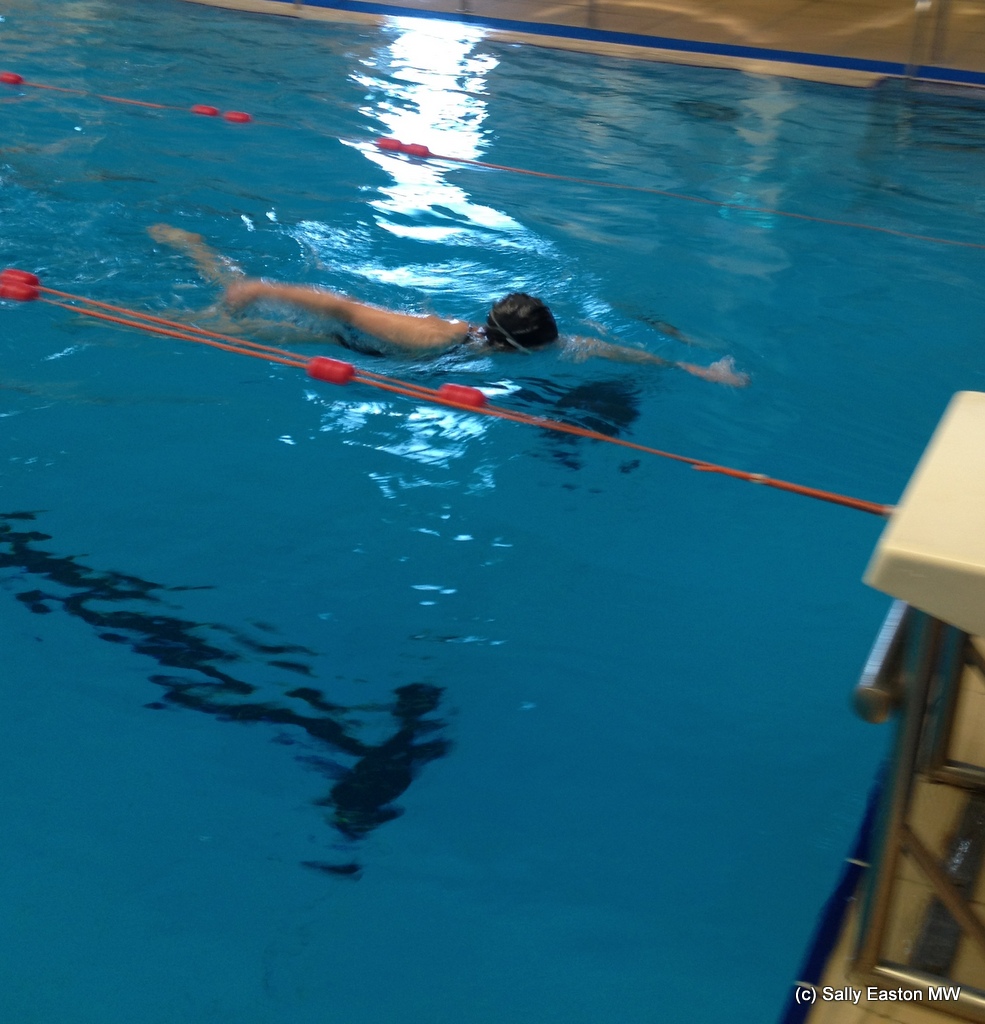 Still me, still not drowning

It’s now the end of March, beginning of April in my swimming sojourn, the no-named nemesis of neurosis or something more significant; just over a month to go before the triathlon (and the marathon is yet to happen at this stage too). I know, I know, I parked all my swimming stuff ‘til I’d done the marathon (though I have been drafting it all up, in real time – it’s all accumulating in the draft folder, ready to flow, I’m catching up with it now). I was pretty focused on London, you know.

I had a whole week off swimming at the end of March. I’d got this virus-thing. Some of my hesitation about swimming had returned, and actually, I noticed I haven’t hesitated as long as that for a while. So actually that makes it a measurable improvement. Cool. Tick one point to me.

The marvellous M has said on several occasions that I should keep a log of my heart rate post-training. I have now started doing this.

High elbows, M told me (again) at the end of March. He’s told me that before, clearly they’d collapsed. Elbows lead out of the water. I’m allowed to rotate my torso 45° each side on its long axis. It helps me to visualise a V-shape within which boundaries I can rotate on this long axis.

I also tried “Pilates string theory” (my interpretation) at this time, in the hope it might help with breathing. I tried Pilates once. The instructor said to engage one’s core, imagine a piece of string tugging up (or was it down?) through one’s belly button as one lies on the floor.  So anyway, I imagined a piece of string from my mouth to my, now high again, elbow out of the water, and I was looking at my, now high, elbow. So as my elbow leads out of the water, the connecting string pulls my head round and out of the water … I’m not sure that image works just in words (or maybe just not the words I’ve used).

OK, swim coach has said to relax. Have I mentioned what a joker he is?

Run coach was talking about lactic acid build up in the muscles (I’m still not sure I’ve experienced this, and I fear I may have to if I want to improve my time in Bournemouth’s marathon in October).

I said to run coach that it’s my breathing that’s my limiting factor – against me going faster – I can’t breathe fast enough. But coach was talking about lactic acid build up with faster running. With slow running the body can remove lactic acid quicker than or at the rate of its creation. With faster running lactic acid is produced more quickly than the body can break it down. Therefore faster running sessions train the body to run longer with lactic build up, and maybe train the body to hasten its speed of lactic acid break down.  That’s what I understood, anyway. That’s not about breathing…   I guess I’ll need to test this theory at some point over the summer (nemesis number two).

By early April, the marvellous M said I’d swum the best two lengths he’d seen me swim. But two lengths are ‘easy’ – short term panic control with racing heart rate. Stop after two lengths, heart rate can slow. At least my heart rate slows pretty quickly, what with all the running training.  Anyway, those two lengths were after my 4-length warm up, so my first ‘training’ crawl. I was thinking about high elbows, and breathing, obviously. It seems I can’t think about more than two aspects of swimming at any one time (legs kicking, ear to the ground, head turning in a single plane etc). He asked if I was relaxing into it. Doh! Guess my reply. I can only think it was because it was the beginning of my workout, so I was fresh and not already under breathing stress from exertion.  But I need to try to remember what those two lengths looked/felt like, because I must be getting somewhere on the right track. He said my technique is not too bad, could be better, but pretty good.  Which frankly is enough praise for me. Happy with that. So he said, I just need to relax with the breathing (that may be my précis of what he said).  Flipping relax. How is one supposed to do that? I mean, really?

M also verbalised what I’d been working out for myself from my running. I need to build endurance. It’s all very well managing a couple of lengths and resting between each one, but I need to build stamina with more lengths, and less resting.  Like I’d built in hills with my running training.

So, M has introduced me to working with flippers and paddles to improve my endurance. And implied, without actually saying it, that I need to spend more time in the pool working through it all.  I’d kind of figured that one myself too, transferring running endurance learnings (more time on feet) across to the pool!

Work with flippers – wow! What speed!  And paddles – I can feel my arms working harder because of the resistance. After using the flippers for the first time, I wondered if it was my legs (not working) that are exhausting me and making me breathless. With the flippers that time, I was a) faster b) floatier and c) I had more time to arrange the breathing somehow. Hindsight is a wonderful thing, and I now know my breathlessness is nothing to do with weak legs. It’s still all in the head.

Bottom line is, I have to build up my programme to improve endurance with flippers and paddles and lengths and pulse taking.  I have noticed my pulse had come down 10 (from ~130 to ~120) since I started which was six months ago. This seems a very slow rate of progress.  I am panicking less, I’d like to say. I even managed to cough (because I’d half swallowed a bit of water) and not stop swimming. Previously I’d have stopped swimming, maybe grabbed the lane divider, had a cough and a splutter, got my composure back (ha, ha, that’s funny) and started again. This time, quick cough, which didn’t resolve the issue, but I decided I could hang on the length end to have a proper cough once I got there. I guess the point is overriding the fear and panic reactions e.g. swallowing a bit of water doesn’t mean I’m going to drown or mean I have to stop to cough and splutter. I can just swallow a bit of water and carry on.

I suggested M teach me the whizzy turny manoeuvre thing at the pool ends … at which he laughed and said, let’s get you swimming first.  Oh well, it’s good to aspire.