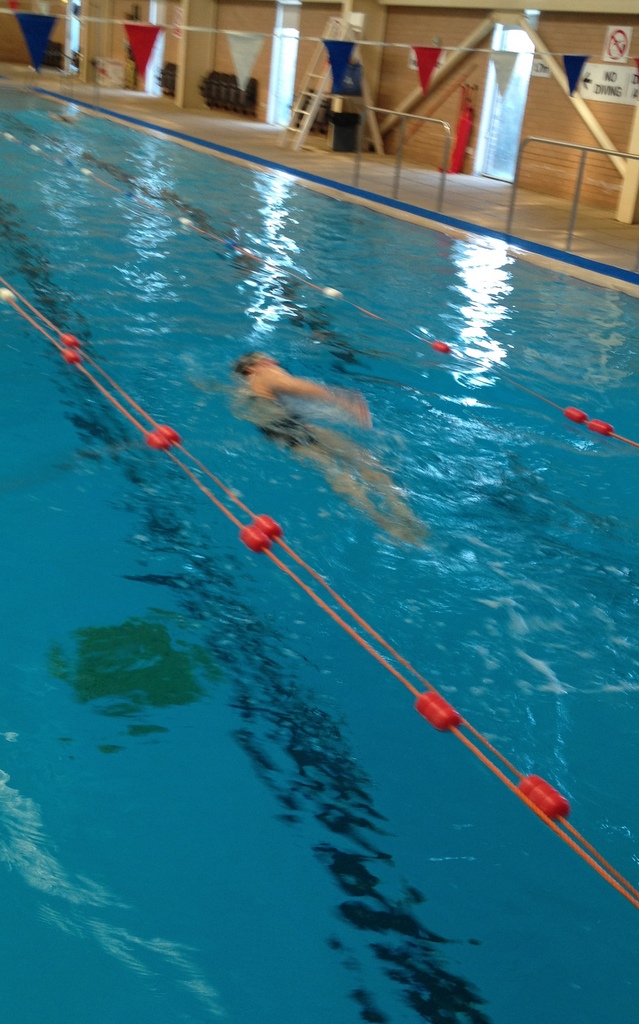 Having endured the most horrid of ‘swims’ in Winky’s May Day triathlon, I am more determined than ever that I will overcome my swimming nemesis. I’m not putting a time scale on it. Yet. But I’m going to nail this swimming lark. I am now the proverbial terrier with the bit between its teeth (aren’t horses the ones with the bits?).

To reinforce positive attributes I’m going to chart progress. And there has been progress. I went back to the pool on Wednesday after the triathlon, determined to swim my 16 lengths in mostly crawl, just to prove to myself I could. And I did.  It was no easier and there were still moments of heart-racing and concentration on breathing-control, but I did it.  The splendid S at the pool very sweetly and confidence-boostingly said it wasn’t me, it was everyone else in the pool on Monday, making it all very difficult!

And as the marvellous M has pointed out, when I started back in October, I could only do half a length then had to stop/stand up/tread water/do breast stroke because I was exhausted. That’s surely major physical improvement. The mental stuff is SO another story.

I’m going to back track a bit, because there have been small moments along the way.

Mid-March, 2013. Is necessity or idleness the mother of invention? It’s not quite in the same vein, but going swimming with a thick cold and clogged up chest might have provided some learnings for me:
a) I didn’t have enough energy or capability to panic. What a weird thing to occur to one as one is ploughing through the deep end (normally a physical place of panic), oh I don’t have the energy to panic. And,
b), with a clogged up chest I didn’t have the wherewithal to gasp deeply and expansively.  Do you know what? I still managed to finish my programme. And I forgot to take my pulse at the end of the session, though from memory my heart rate wasn’t racing quite so much (either way that sounds like a positive memory to come away with, so I won’t question it too much.)  Calmer. Not particularly well, but calmer.

Previous learnings: actually an early one that I keep forgetting (???), is that when I started this swimming lark I thought I’d figured out I could only breathe on one side because my neck doesn’t (didn’t) rotate enough to get access to the atmosphere.  Mind you back than I was probably rotating my body through 180° rather than 90° – see future post (how much energy was that using, therefore how much extra oxygen was that demanding?), and I was looking to the back corner of the swimming pool building as a focus point for my breathing (again how inefficient was that), rather than a brief 90° single-plane neck rotation either side. Anyway the marvellous M suggested I breathe every four rather than every two because he thought every two might be too much breathing (see (b) above). This was a concept I failed to understand for some time.  I tried the four stroke, and it was OK for half a length, but then not enough air.  I took to heart the two stroke being too much breathing, especially given my huge, panicky, gulping approach to breathing, even though it didn’t really compute (mind over matter), and have subsequently trained myself to breathe every three strokes.

It did recur to me somewhere around Feb-March time, that the breathing too much scenario may have been beginning to make sense, intellectually at least. Breathe too deeply and actually there’s not enough time to exhale it all while you do three strokes, so there’s a rush to exhale AS WELL AS a rush to inhale.

But I need a lot of air. (At the moment???). I know I’m not efficient. At least I can (I think) understand, intellectually at least, that when I become more efficient, I’ll actually need less oxygen (won’t I? Isn’t that how it works?).

The breathing timing/amount/confidence thing has got to get easier, surely? Just not so far.

My new mantra is all about experiential learning. I haven’t drowned yet. I’m swimming some lengths. Therefore I can swim some lengths without drowning.