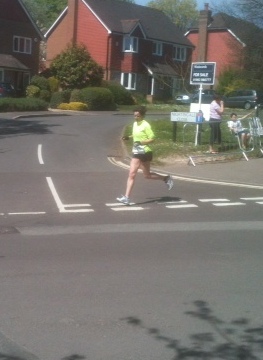 Not doing enough of this

Well, I did enter the Bournemouth marathon, which runs on Oct 6th.  After the London marathon in April, I printed off an 18-week training programme, which would have meant starting training at the beginning of June. I’ve promptly ignored the first month and I’m thinking I’ll start training at the beginning of July. But then I’m going on hols so it’s going to be half way through July before I know it.  Where’s my commitment gone?

In my defence, I have been a bit pre-occupied with swimming. On which subject it’s all gone to my head – literally – I’m learning tumble turns now. Future post…

And I have only kind of been ticking over on the running front. Obviously I want to build speed to try to better my time.  Maybe that’s what it is.  London was just a question of finishing. Anything I did was going to be OK. Now I have to get better. That’s a whole another level of seriousness. And now I know what’s involved in training for a marathon, I can’t just go in blindly and imagine any training I do is better than not training.

It’s time to face my second nemesis – interval training.  Actually, I may already be seeing him in the distance. I think this is what I’ve been doing at run club for the past couple of weeks. Runs laps. Rest. Run laps. Rest. Repeat. Different numbers of laps before resting. This is interval training n’est ce pas? Last session was tough, really tough. My hips hurt. That’s a first. I’m assuming it’s because I was trying to run faster.

My ticking over has involved sourcing a 5 mile lap, flat as possible (tricky round Winky), which I’ve been running one lap or two laps, as fast as I think I can.  I haven’t done it too many times. Keep slowing down part way through, so I’m probably setting off too fast.

I have a sneaking suspicion this may involve more core work and more strength building as well as running faster. Hugely succinct tweet from @girlwhatruns (Liz Yelling) the other day: “If you want to get faster- you need to train faster… Do shorter reps with longer recoveries and really go for it!!” If it wasn’t so long, I could adopt this as a new mantra.

I have been building hills. In mid May I started doing St Catherine’s Hill again, just started with a couple. Then (I’d been reading again), I decided I needed to make the hills longer, so now I don’t stop at the top of the steps, I keep going all the way to the maze at the top of the hill, and round and down. Repeat.

That was a killer, first time I tried it. Keeping going the first time up to the top of the hill, a snail would have beaten me. It was like I was back to last July, when I’d just started jogging, crawling up one of the (slight) slopes at Farley Mount. Slow and easy. Must complete. Oof.

I’m up to four hill ascents now (well I’ve done four once, three seems to be my ‘normal’ max). The only good thing about going all the way to the top of the hill is that the recovery back down again is longer.

I’m using my shoulders more in running too (as well as the swimming). Trying to get faster seems to involve much more use of shoulders, driving the arms to drive the legs.  Even that’s been hurting (just as well I’ve gone back to the magical Michaela for more physio), a bit like growing pains, or like having air trapped under the shoulder blade, though I’m not quite sure how I know what that feels like.  So far, remedial shoulder exercises not helping this. Feeling a bit self-piteous. My remedial glute exercises worked well, once I finally learnt how to do them properly. I was kind of hoping the shoulder(s) would follow the same pattern.

One thought on “Bournemouth marathon – the false start”